Welcome, reader! According to Antony Hegarty in this second decade of the new century our future is determined. What will it be? Stays all the same and do we sink away in the mud or is something new coming up? In this blog I try to follow new cultural developments.

Do not go gentle into that good night, Old age should burn and rage at close of day; Rage, rage against the dying of the light. Dylan Thomas.

Movie review: The boy in the striped pyjamas (2008), by Mark Herman 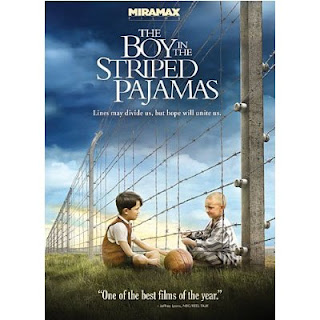 ‘Life is not so much about choices but about duty.’

A lot of movies are inspired by and take place during the Second World War. When concentration camps are involved, like in Schindler’s List, usually the facts are usually romanticed. They are too horrible to show in a movie. This is also the case in The boy in the striped pyjamas, but that doesn’t make this movie bad at all.

Bruno, an eight year old boy, is very happy in Berlin. Allthough his father is a Nazi leader, life seems to be wonderful. He plays with his friends in the streets, has a a lovely caring mother and a sister, who is twelve years old.

The movie starts at the moment that Bruno hears that his father got promotion in the army. The consequence is that they have to move to another part of the country.

There is a big difference between Berlin and the surroundings of the concentrationcamp, next to which they come to live. The house is not cosy at all, compared to their place in Berlin and Bruno has got no friends. He and his sister do not go to school but an old teacher comes to them. One day Bruno sees that kitchenhelp Pavel, who brings vegetables, wears striped pyjamas under his clothes. Bruno is a boy who likes to explore and sees barns through the window on the backside of the house. He thinks there are farmers living nextdoor and maybe he will find a friend overthere, but his mother doensn’t allow him to leave the frontgarden.

Bruno asks Kurt, the assistant of his father, for an old tire to make a swing. Kurt orders Pavel in a very unfriendly way to help Bruno. When Bruno falls from the swing, Pavel takes care of  the wound and tells Bruno he was a doctor before. Bruno doesn’t understand why he is peeling potatoes now. One day Bruno escapes through the backyard and finds the camp. A boy called Schmuel, is sitting behind the fence. He has the same age as Bruno and they become friends. Bruno brings him food, they play checkers and Bruno talks with him about his clothes and his number. At first Bruno thinks the fence is to prevent the animals from leaving, but Schmuel tells him he is a Jew and that his father was a watchmaker before and that they were forced to live here.

When Schmuel is in their house to assist for a party, Bruno gives hm bread. ‘We’re supposed to be enemies,’ he says to Schmuel, since he has heard so by his teacher. Kurt discovers that Schmuel has food in his mouth and is very angry. Schmuel says that Bruno gave him the food, but Bruno denies. It makes him feel guilty, even more when he sees that Schmuel has been beaten up. While his sister becomes more and more a model Hitler-youth girl, Bruno starts to wonder about the situation he is in. He apologizes to Schmuel and their friendship grows.

Bruno’s mother is not happy to live so close to the concentrationcamp. When the filthy smell from the crematorium reaches their house she is shocked. His father understands that it would be better for his wife and the children to go live in Heidelberg temporarily. ‘Life is not so much about choices but about duty,’ he says to Bruno, but the boy doesn’t want to leave.

It is not very plausible that Bruno and Schmuel are able to talk and play with the fence between them, but on the other hand one cannot make a movie without changing the reality in some respect. The way this is done in The boy in the striped pyjamas is original. The way Bruno, a great role by Asa Butterfield, explores his world is fascinating and makes up for not copying the much harsher reality.

‘Childhood is measured out by sounds and smells and sights, before the dark hour of reason grows.’ This saying of the British poet John Betjeman, the motto of the movie, describes the meaning very well.

The grand pictures and the suggestive music in The boy with the striped pyjamas, after the best selling book with the same title from 2006 by John Boyne, are invasive and holds the attention of the public tight towards the screen. That would even have been more so when the English language would have been replaced by German.